What To Watch For In Tonight's All-Star Game 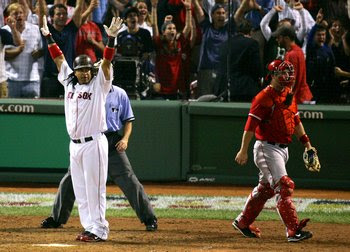 Intern Bill over at The Big Lead put together a nice lil' piece breaking down the NL and AL rosters. I'll pick a few guys I'll be watching for.

Chipper Jones. Even though Larry Wayne Jones is no longer hitting .400, he's the best at the hot corner and could possibly hit a homer from each side of the plate if he gets enough ABs in the game.

Aramis Ramirez. A-Ram loves the spot light. Whether it's making a Gold-Glove caliber play (yeah, he's a pretty damn good defender these days) or it's standing at the plate admiring a game-winning home run, The Ram might have one of each tonight.

Brad Lidge. If your name is Brad Lidge, you're thankful that Albert Pujols is on your team. If the NL has the lead going into the bottom of the ninth, I'm giving him the ball. No homo. (Did I do that right?)

Manny Ramirez. The king of admiring home runs is still admiring the walk-off shot from last year's ALDS against the Angels. I can see him doing it again at Yankee Stadium.

Mariano Rivera. The G.O.A.T. will be the guy closing it out in the top of the ninth if the AL has the lead unless....

....Jonathan Papelbon gets the nod from Tito Francona. How odd would it be to see a Red Sock picking up a save, walking off a winner at Yankee Stadium and getting a rousing ovation? Just wondering.

Milton Bradley. I can see him grabbing two hits tonight. One, a double to right-center and the other comes at the expense of a New Yorker's chin.