Will You Bear To Watch It? 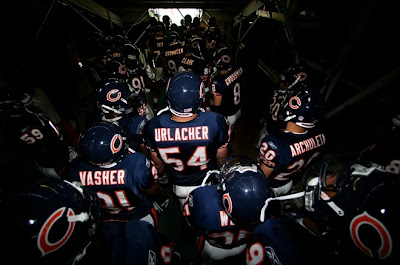 Hey Chicago, where do your loyalties stand?
The Bears open training camp Wednesday, but with two first-place baseball teams, how much will you be paying attention to a team coming off a 7-9 record one year removed from a Super Bowl appearance.

This is a slight change from the norm in the Windy City, where training camp serves as a distraction from Chicago's cellar dwelling baseball teams. But as the Cubs and Sox sit atop their respective divisions, the team known for uniting the city is looking like an afterthought.

The Bulls built some good will towards the fans after winning the NBA Draft Lottery and selecting Memphis guard and hometown product Derrick Rose. But they failed when they bumbled the Mike D'Antoni hiring that eventually landed Vinny Del Negro his first ever coaching job.

John McDonough and Rocky Wirtz have Blackhawks fans buzzing with the combination of young stars and a free-agent spending spree for a team that is rebuilding its image one day at a time and increasing the popularity of hockey on West Madison.

And while the Bears have the excitement of having several open competitions for starting positions, that just means they don't have anyone that is head-and-shoulders above anyone else.

I hope Lovie Smith is a bricklayer, he's got some rebuilding to do.