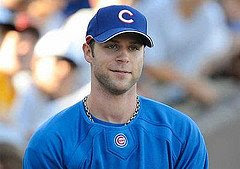 James Richard Harden, you have quite a task ahead of you Saturday.

Not only do you have the task of living up to the hype brought on to you by Jim Hendry (who essentially made you the savior of the starting rotation). You have to do it in front of a nationally televised audience and about 40,000 rabid fans at the shrine known as Wrigley Field. Not to mention, you've gotta follow up Sean Gallagher's Oakland debut in which he pitched 7-innings while allowing only 2 hits in the A's 9-2 victory over the Angels.
Luckily for you, the woeful San Francisco Giants line-up awaits. You know, the one without a .300 hitter in its everyday line-up. The same line-up you shut down June 14.

Not bad. But wait, there's more.