BREAKING: Rich Harden To The Cubs! 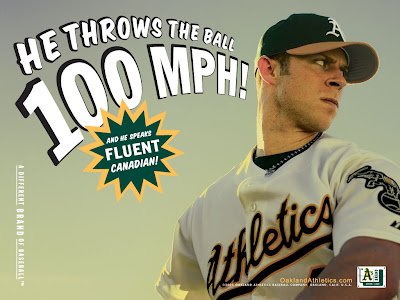 I see your CC (remember, no periods) Sabathia and I raise you Rich Harden.
The NL Central arms race kicked up a notch with the news that the Cubs acquired Rich Harden and Chad Gaudin from the Oakland A's in exchange for pitcher Sean Gallagher, outfielders Matt Murton, Eric Patterson and minor league catcher Josh Donaldson.

Dare I say this is a fair trade for both sides?

The Cubs get the No. 1A starter they've been searching for (Harden) and a reliever who can also spot start (Gaudin). And here's the kicker, he's cheap, young (26) and under contract ($4.5 million this year with a $7 million option for '09).

Billy Beane gets an outfielder who is an on-base machine (Murton), a speedy IF/OF in Eric Patterson, Sean Gallagher (who is going to be great whether it be in the rotation or at the back of the bullpen) and Josh Donaldson who wasn't going to be in the Cubs' plans because the blockage provided by All-Star catcher Geovany Soto.

In the short run, it looks like the trade benefits the Cubs more. However, take note that the A's now own eight of Chicago's former top-20 prospects (Gallagher, Murton, Patterson, Donaldson, Gio Gonzalez, Fautino De Los Santos and Ryan Sweeney) and will likely benefit in the long run.

It's not like this move was just to answer what Milwaukee did. It was expected that Jim Hendry would make a move, but no one expected it to be this soon. Well done, Jim.