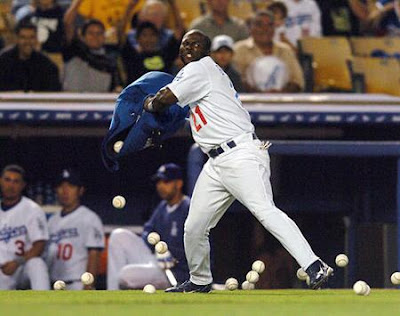 The Milton Braldey watch has begun.

No, not the watch in which he, Ted Lilly and Carlos Zambrano are questioned in connection with the disappearance of a certain St. Louis Cardinals manager and first baseman.

The watch where Bradley proves to me that he can't handle being healthy for five minutes.

From the Chicago Sun-Times:

"Playing in his first game as a Cub on Thursday, right fielder Milton Bradley saw seven pitches, drew a first-inning walk and was replaced by a pinch runner because of ''mild tightness'' in his left quadriceps.

It was a precautionary move for Bradley, who told the field staff before the game that he felt the tightness in his leg and agreed to play long enough to get one at-bat."

Only the Cubs would sign a player who gets injured while drawing a walk.

So Bradley is hurt. In more breaking news:
Who's ready for the Micah Hoffpauir Era in right field to begin?

I wonder if the Cubs know Manny Ramirez is still on the market.