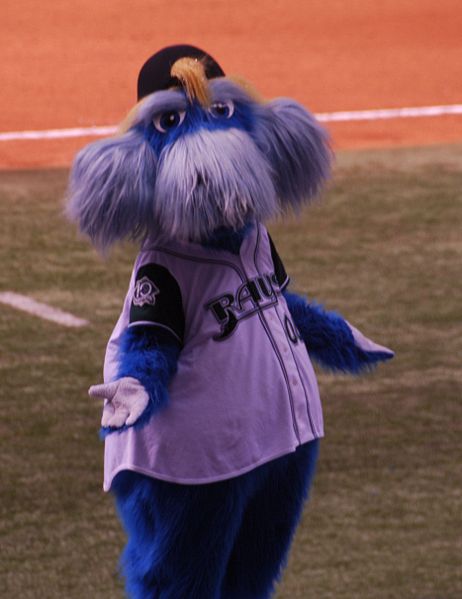 I still can't believe the Tampa Bay Rays went from worst to first in 2008.

Especially with a mascot acting like this. It's something you expect out of the Capitol City Goofball.

And what the heck is this thing? It sure isn't a Ray or a "Devil" Ray. I think they should go with a big sun like the one from Semi-Pro.

Anyway, before the season started I told some people they weren't dealing guys like outfielder Carl Crawford because they thought they could compete. Everybody laughed at me and I didn't think they'd win the division, much less the entire American League but I knew an improvement was in store for them.

Sure for most everyone, this team came out of thin air but it shouldn't have.

This team already had proven stars like Crawford, B.J. Upton, Scott Kazmir, James Shields and Carlos Pena but they just hadn't put it all together yet.

Add in good fortune with the rotation and a crafty trade that brought in Matt Garza and poof, Evan Longoria comes riding in on a white horse to save the day.

Pretty much everything went right for the Rays in 2008, so the stories goes for most teams that make it to the World Series.

There are a couple reasons things went right though: Manager Joe Maddon pushed all the right buttons on a young team, they used an abomination of a stadium (Tropicana Field) to their advantage and years of being terrible netted them top-five picks year after year.

All the terrible baseball paid off for lack of better term.

Now that isn't to say Tampa Bay can't fall on its face this season and finish in third but it's a possibility given the division it is in.

Feasibly, by some preseason indicators, the Rays could win 90 games and still finish third.

And history doesn't particularly indicate good things to come given the previous history of teams that have lost in the World Series.

Take the Colorado Rockies last year for example and the years before that take a look at the Detroit Tigers and Houston Astros records and you'll see that the bottom falls out after a World Series defeat.

It isn't like Tampa Bay had a ton of money to splurge, either.

Most fans didn't show up until the stretch run because nobody wants to sit inside a giant marshmallow in downtown St. Petersburg.

Check that... It is more of a circus-like big-top than a marshmallow.

And while newly minted slugger Pat Burrell is a marketed improvement over Rocco Baldelli, this team is essentially the same as it was in 2008.

By no means is that a bad thing, either.

It's just tough to stand relatively pat when you got the goofballs in the Bronx throwing around money like Pacman Jones in a club. At least, the Yanks aren't in trouble for... oh nevermind...

But seriously, watching the New York Yankees drop cash like that in this economic crisis after you won the American League with a flimsy payroll is like winning a Ford Mustang only to have your neighbor buy a brand new Ferrari Enzo a few weeks later.

So much for being able let it all soak in.

With a pitching staff that includes Kazmir, Garza, Shields and potentially David Price, the Rays should be in competition with the Yankees and the Boston Red Sox for years to come which speaks volumes that a salary cap isn't warranted, you just have to be smart...and in this case...bad for a decade.

The lineup is awesome from top-to-near bottom with the aforementioned players.

We all know it's a three-horse race and it remains too early to tell who's coming out on top. Right now, I'd have to say the Yankees and Tampa Bay are 1A and 1B in my book.