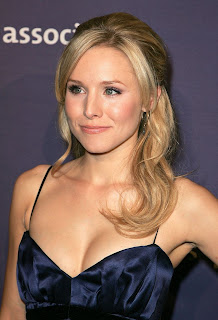 Some people said my first Top 10 celebs list was to vanilla. Too expected.

So I drop this Tina Fey on the folks and I get questioned. Tina Fey is great, don't hate.

So today I went with Kristen Bell, the other half of the Forgetting Sarah Marshall starlet cast.

Let's get some Dosage.

Panthers pound Salukis to secure season sweep. I'll be honest, I didn't see this one coming. SIU just played two solid games without its floor general, Bryan Mullins, and had standout games from their young guards (Kevin Dillard, Justin Bocot). Well, UNI showed why it is sitting atop the conference with a 26-point win.

From Sweet 16 to playing on Thursday in St. Louis has officially become a distinct possibility. [Daily Egyptian]

Close the 'Book' on that one. In a bit of happier news, freshman forward Anthony Booker isn't going anywhere. When freshman guard Torres Roundtree left the team when the New Year started, rumors swirled that Booker, his life-long best friend, would follow. In this feature story, he puts that all to rest. [Dawg Tracker]

Roundtree booted from JUCO. In a related story (only in the sense that it relates to a former Saluki basketball player) Roundtree, who recently enrolled at JUCO power Southern Idaho, was dropped from the team after reportedly failing a drug test.

It's been quite a dramatic fall for Roundtree, who started several games for SIU. I hope he gets his life back on track. [Magic Valley]