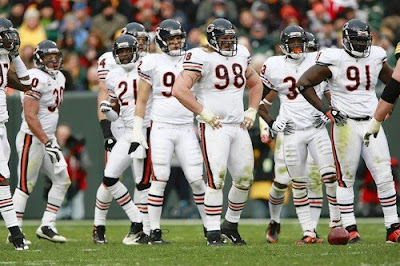 No, the team isn't much more active when the ball is in play.

Will Bob Babich please stand up?

I'm sorry ... wait, no I'm not ... but the highly-touted Cover-2 defense isn't covering anyone and the Bears defense has been torn to shreds this season.

And that is not acceptable, not for a fanbase obsessed with "Bear football" centered around a hard-hitting defense.

And while the defense is still hard-hitting, it's a shame the hits come after the opposing offense gains another first down.

Wanna know what's worse? Guys like Tommie Harris, Lance Briggs, Brian Urlacher and Mike Brown are in their prime of their careers and their talents are being wasted playing in a defense that can't stop the pass in a league that favors the passing game.

I know. It was the defense that helped the Bears reach the Super Bowl a few years ago, but your argument is flawed.
Heck, even Mike Brown (who's usually out for the year during Week 10) gets it.

"Once we come to grips our defense isn't what it's supposed to be, then we'll all be better off. The perception is we have a good defense. The reality is we don't. … Everyone wants [our defense] to be what it used to be, and it's not that."
—Bears safety Mike Brown

Yet, all the blame shouldn't go on the defense.

While the NFL progresses into a pass-happy league, offensive coordinator Ron Turner continues to use his 1995 offensive playbook as he still believes Erik Kramer and Jeff Graham are still on the Bears roster.

Guess what Ron, they're not. In fact, somehow this offense has regressed since then.
Why are the Bears the only team in the NFL that cannot properly run a screen to their running back? Why, on third down, does the offense design patterns that come up short of the first down marker? How many times are you going to run dive plays with the explosive Matt Forte?

It's sickening. The offense is truly offensive. But believe it or not, Turner shouldn't shoulder the entire blame.

Other than Forte, the Bears don't have skill position players that you would say are "plus" guys ... or "playmakers" as football fans would call them. Greg Olson's nice, but he's buried in the depth chart at times behind Desmond Clark.

Marty Booker is old and the rest of the receiving corps are just bad. Devin Hester has not only been underwhelming as a receiver, it looks as if he's lost his swagger and speed in the return game ... which was supposed to be the Bears' biggest weapon coming into the season.

The offensive line has its moments, but at times it looks old.

Oh, and there's no reason to beat the dead horse that is Rex Grossman. And if you're looking for Kyle Orton to be your savior, well, wait 'til next Sunday and instead of waiting for noon to get up and catch the Bears on your local FOX or CBS affiliate, follow the wife and kids to church.

And if the Bears come out next week and hang 30+ points on the St. Louis Rams, all will be well in the City of Wind. But I refuse to get caught up in the hype.