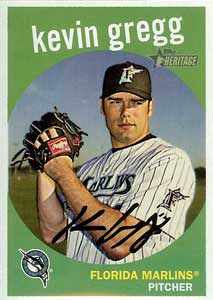 Alright, I'm pretty sure you all are sick of my bitching about this Kerry Wood situation. And to be honest, I really can't blame you.

So rather than venting (again), I'll allow the rest of the media world to do it for me.

"Getting Jose Ceda for one year of Kevin Gregg is a heist for Florida, and could really end up as a disaster for the Cubs, given how they intend to realign their pen. They may use Gregg in the setup role, even though there's not much reason to anticipate he'll be more than a middle reliever in performance. Gregg has an average arsenal, sinker-slider-split, and other than occasionally running the fastball up to 94 doesn't have a plus pitch. His control is below-average, with 72 unintentional walks over the last two years in 152 innings, and only a fluky-low home run rate in 2008 kept his ERA under 4. He's not quite Antonio Alfonseca redux, but he's no replacement for Kerry Wood, either."

I lived through the Alfon-suck fest era. Thanks Jim for exposing it to us again.

Dave Cameron of FanGraphs says the deal could cost the Cubs a couple wins in 2009:

"Considering the leverage that closers get, it’s fair to say that the difference between Wood and Gregg could be 1-2 wins in 2009. I’m not sure the Cubs are in a position to be giving away wins like that. For a contending team with a big payroll, they should have done a lot better for their new relief ace."

MLB.com's Jonathan Mayo draws the comparison of Lee Smith - former Cub who went on to be the all-time saves leader until Trevor Hoffman came around. That's exactly what Cubs fans wanted to hear:

"Ceda, who'll be just 22 in January, resembles a young Lee Smith. He's 6-foot-4 and 275 pounds, and looks the part of an intimidating short reliever. He throws plenty hard, with a fastball that sits comfortably in the upper 90s and has hit triple digits in the past. His slider has sharpened considerably since he began working in relief in 2007."

FOX baseball midget Ken Rosenthal talks to a scout that compares Ceda to the good version of Armando Benitez. Ugh!

"Many in the industry were surprised by the Cubs' willingness to part with Class AA right-hander Jose Ceda for one year of righty Kevin Gregg. Ceda, 6-foot-4 and 275 pounds, is a big, strong reliever with dominating power stuff. "He looks like Armando Benitez," one exec says. From a scouting perspective, that's a compliment."

So let me get this straight. The Cubs gave up years of having control of a 22-year old fireball throwing Lee Smith-Armando Benitez hybrid for a 30-year-old Antonio Alfonseca (with the proper amount of fingers and toes) who had problems pitching in one of baseball's most pitcher friendly parks?

See friends, it's not always the 100 years of suck that have Cubs fans willing to blow their brains out. Sometimes, it's how they go about it.