The Final Installment of the Dirty 30 Chronicles (A.K.A. The End of an Era Pt. II) 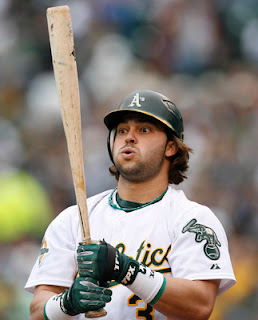 It was a short lived run in Chicago, but it is the end of a bittersweet era on the South Side of Chicago.

Granted, we'd know you better if you didn't give us "The Dirty 30 Special" but we'll let it slide. Thanks for the free beer over at that establishment over by DePaul ... I'm sure the girls there will miss you.

If they ever remember you after they fall victim to your charm and your ability to bat 1.000 off the field despite holding a .200 average on the field.

And finally the truth is coming out about the Dirty One ... apparently Joe Cowley of the Sun-Times got ahold of this blog or used his own sources to find out what I already knew.

"It was an easy Kool-Aid to drink in April, when (Dirty 30) was bringing a solid resume from Oakland and giving the White Sox a new-look, high-on-base-percentage mentality atop their lineup.

By September, the Sox were trying to find a dark corner in which to regurgitate that ''Dirty 30'' juice they all had taken big gulps of."

"'Dirty 30' juice" - that's what it's called. That's how he picked up her up. Man, where can I get some? I guess I've gotta head out east way and meet up with Swish. You think he sells it in cases? You think he'll hang out with Jay-Z at the 40/40 Club? You think he'll sell it there?

I think he'll be just fine in New York, especially after reading this transcript obtained by one of my super-secret sleuth spies after the trade went down. Thank goodness for the Patriot Act.

Kenny Williams, Brian Cashman and Dirty 30 walk into an establishment together, grab some drinks and have a seat.

KW: Nick, I'd like you to meet my friend Brian. He works in New York.

KW: Well, I've brought you guys here to see how you two work together. I've got to take this call.

Williams walks away from conversation, cell phone in hand.

BC: Nick, what do you bring to the table.

BC: Well, Nick, that's a concern for us. You were on base only 33 percent of the time last season.
A career low.

D30: Really? I'd tend to disagree because I have proof to the contrary. Did I tell you I'm versatile at many positions?

BC: I see that you've played in all three outfield positions and first base, but convince me that last season's .219 batting average was just a fluke.

Bartender hands Cashman a glass with what is presumably "Dirty 30 juice." He drinks.

Lu, you need to put up your picture with Dirty 30 himself as proof that you have sources.