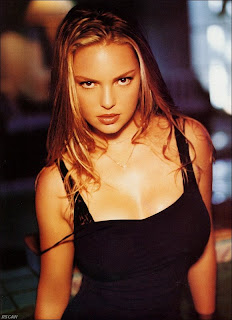 It's been a while since I've been able to handle a full day of posting, and for that, I'm sorry.

Katherine Heigl welcomes you to the week that will be. And what a welcoming site she is, via Chickipedia.

Today we'll cover some winning college football, via Brian Feldt. Some short-comings in the pro game, and a wild take by Greg Couch.

And how bout some talk about Da Bulls. And with all due respect to my basketball guy, Jeff, I've got to take this one.

But first, we must move forward with Dosage.

(Speaking of which, I think it's time for some DayQuill)

Saluki stout 'D' stuffs Leathernecks. Back-and-forth they went for 58 minutes. The No. 9 SIU football team landed the first blows, forcing No. 17 Western Illinois to a three-and-out and then scoring on two of its first three possessions.

Even though the Salukis looked poise to put the game away early, they were unable to convert long drives into points and the Leathernecks were able to come within three points.

That's when the SIU defense got tough.

Cornerback Korey Lindsey picked off two passes in the span of about 20 seconds as the Salukis (7-2, 5-1 MVFC) escaped with another victory.

Remember the Titans? Well, they're 9-0. The world's least impressive perfect team found another way to extend its winning ways. 14 fourth-quarter points by the Tennessee Titans helped push them past the home-standing Chicago Bears, 21-14.

Rex Grossman isn't your Jack Daniels swigging, neckbeard wearing quarterback. I get it.

But Tommie Harris isn't doing jack-diddly on the defensive line. Charles Tillman and Nathan Vasher have forgotten how to cover passes. And Marty Booker is still the Bears' primary receiver.

Whatever, bring on the Pack!