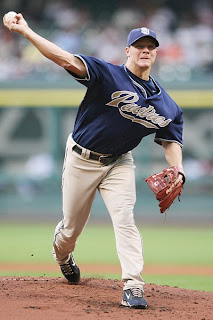 You might as well put some lipstick and a skirt on the Chicago Cubs, because they're such a tease.

The Hot Stove League is only in its primary stages, yet I am already sick of this Brian Roberts ... er ... Jake Peavy situation.

He's going to be traded, I get it. He is one of the National League's elite pitchers who wants no part of the San Diego Padres' rebuilding plans. I get it.

So the Cubs, Atlanta Braves and the Los Angeles Dodgers are the three remaining teams in the Great Peavy Race. But why do the Cubs have a shot?

I'm still not sure.

Since the beginning of time, the Dodgers have always had myriad top prospects and more often than not they pan out. But L.A. doesn't want to rebuild one of its main rivals' fledgling farm system.

The Braves have also been known for developing talent, but maybe S.D. GM Kevin Towers is wary of Atlanta's trade history in which it trades "prospects" that generally don't pan out while keeping its best prospects for itself.

The Cubs, well, they don't have elite prospects. Their package centers around the fading star of Felix Pie, above average left-handed starter Sean Marshall and 10-year-old middle infielder Ronnie Cedeno.

Yet, somehow the Cubs are the frontrunners.

But it doesn't matter until a deal gets done.

Someone get it done already!

I'm tired of "updates" that tell you that there is no new news. What's the point of said update, then? It's frustrating, it makes me want to not read anything baseball related until April.

College football is as interesting as ever as the best of the BCS schools try to separate themselves and get to the top. FCS schools are putting forth some interesting football too as those teams are vying for a playoff spot.

We're at the 8 game mark in the NFL and things are really heating up as the weather is cooling down.

The NBA is off and running and there are no shortage of storylines in the Association this season, whether it's the No. 1 overall pick Derrick Rose, the best player in the world Kobe Bryant, the monster that is LeBron James or the repeat attempt of the Boston Celtics.

Even college basketball, which is in exhibition season, is worth taking notice as teams and players try to establish themselves with a few early wins.

With all that said, for some reason, I'm hitting the rumor mill early and often hoping something goes down.

I think I'll finally take a hint: Nothing is happening.