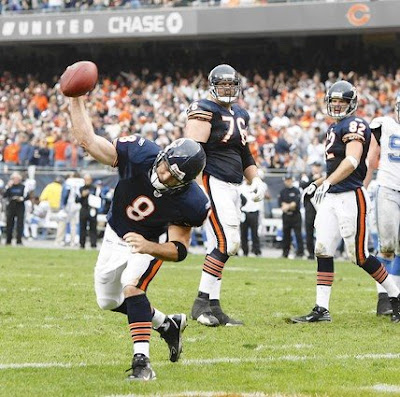 Did he just lead us to victory?
Don't look now, but it looks like Captain Neckbeard is gonna be out for a while.

But fear not, Rexy's back.

And before you boo me off my own blog, let me break it down for you.

Rex Grossman isn't perfect, nobody is.

Alright, if you don't look like Brad Pitt or Jessica Alba, your significant other isn't Denzel Washington or Gabrielle Union and you're not pulling in six-figure paychecks, you're far from perfect.

Now that I've successfully put you in your place, we can move on with this post.

Kyle Orton's injury is a cruel twist of fate for a team and a fanbase that is so desperate for a quarterback, they tried match.com and were unsuccessful.

But at 5-3, the Bears are in first place in the NFC North so the Bears and their fans have nothing to complain about.

Because it could be worse: we could be stuck with Brad Johnson and Brooks Bollinger. Or Dan Orvlosky. Or Tavaris Jackson. Or ... you get the point. There are plenty of quarterbacks that don't deserve to be playing Madden '09, let alone starting in the NFL.

But Grossman is a proven commodity. He's been good. Heck, he's been great at times. And maybe, just maybe, losing out on this quarterback gig was just the wake-up call he needed.

He now has the opportunity that most people either don't deserve or don't capitalize on when it comes. Now that he's been given a second chance, look for the Sex Cannon to take advantage of it.

Grossman's job has turned from playmaker to caretaker. And with a relatively conservative playbook, a strong running game and a defense that has a flair for the dramatic, there's no reason for it not to happen.

Ignore the pick he threw today (because replays would disagree with the refs ruling) and note that he threw and rushed for a touchdown.

Maybe he gets it. Maybe he knows this is his one shot to make things right in Chicago. Maybe he knows that if he brings the Bears back to the playoffs, he'll return to the cult figure he was for the first half of the Monsters of the Midway's Super Bowl season.

Before we get ahead of ourselves (negatively or positively) we must note that Rex (and the Bears) have their work cut out for them.

The Tennessee Titans have been the league's best team thusfar. The Green Bay Packers are in the hunt despite relying on Brett Favre's back-up all season long. The St. Louis Rams are a joke. And Rex won't even have to face Minnesota's best player, because he's on the offensive side of the ball (The Real Adrian Peterson).

So before you go printing out Super Bowl tickets or jumping off the Sears Tower, take a look at the big picture. And thank your lucky stars J.T. O'Sullivan is on the San Francisco 49ers.