Out goes Wood, in comes Johnson? 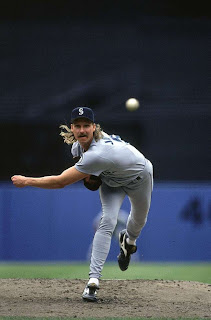 All dirty jokes aside, I laughed a little insde when I heard that the Chicago Cubs were interested in adding Randy Johnson to the starting rotation.

The Big Unit. The angriest looking motherf*cker in the history of baseball. He of the 13-0 record against the Cubs, including a perfect 4-0 mark at Wrigley Field.

If Johnson were to join the Cubs, I would doubt his dominance at the Friendly Confines had a strong chance to continue. He wouldn't be facing Cub hitters. However, he'd make a nice back-of-the-rotation guy and veteran presence.

But, in the grand scheme of things, it would be another classic example of how Tribune Co. runs things. When Johnson was a free agent in his prime, the Cubs had absolutely no interest in the Unit because they weren't willing to increase payroll. Notice that I emphasized "willing."

Now, as Johnson enters the twilight of his career as he approaches the 300-win milestone, the Cubs want to handsomely pay a 45-year-old lefty starter.

Nowadays, it seems that's all the Cubs want to do: Throw money at their problems.

And while it might work in the dating world, I'm not quite sure it will work in baseball.
(See NY Yankees circa 2002-present)

But that's a whole other can of worms that don't need to be opened today. I just thought I'd throw out some food for thought for ya.

But while we're at it, maybe the Cubs should add Ken Griffey Jr. to play right field, he's a free agent. I wonder what that Alex Rodriguez kid is doing these days.