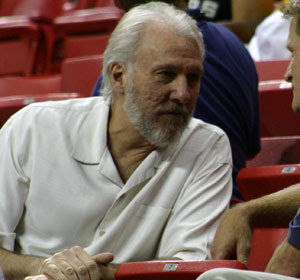 Believe it or not, I am still here at TBDS. Someone who is not where they are supposed to be is Greg Popovich.

The San Antonio Spurs coach has gone missing and has been replaced by Donald Sutherland on the bench.

Don't get me wrong, Sutherland is a great actor. I have enjoyed everything from Ordinary People to Pride and Prejudice. But I don't know if he is capable of coaching this storied franchise to another Western Conference title.

I am here to give Sutherland some tips on how to get this injury-prone squad out of the basement and back into contention. Then I will see if I can figure out where Popovich went.

1. Give Mason the Minutes
Roger Mason has resurrected his career and it is time to ride that hot hand for as long as possible. With Tony Parker and Manu Ginobli out of action, Mason is the only "threat" this team has from the perimeter. I don't know if it is because Mason has a Web Diary now, but he is playing inspired basketball, and if he can play 40+ minutes a night, go for it.

2. Everyone...and shot...deserves a second chance
The Spurs are 1-4 and there is a reason for it. The offense is dead. There isn't much a team can do about a terrible shooting percentage, but second chance opportunities on offense will help and that is where Kurt Thomas comes in. Thomas has not played a whole lot this season, but with Tim Duncan having to do all the offensive work, it would be wise to get Thomas on the floor and get this team some much needed offensive boards and interior defense. For example, he notched 6 boards and 2 blocks in just 13 minutes against the Miami Heat in the Spurs' most recent loss. If you bump that time up to 20 minutes, there is a good chance he gets 10 points and 10 boards.

3. The future is now, even if it isn't bright
So the Spurs bench is pretty mediocre, but so was their new coach's performance in Invasion of the Body Snatchers but he still made it work. So what Sutherland needs to do is give guys like Jacque Vaughan, George Hill and Anthony Tolliver some playing time. Vaughan is a good defender with high basketball I.Q., and Hill and Tolliver have upside. I got to watch Tolliver at Creighton and while he is nowhere close to an NBA center, he could be a servicable power forward with his outside touch. Hill has been aggressive when given the opportunity and has a high ceiling.

4. If you still can't win...call the professor
Donald Sutherland may not know basketball as evidenced by the 1-4 start he has the Spurs off to, but he knows how to ease his stress. If the losing continues and Sutherland finds himself on the hot seat, he should just channel his performance of Professor Dave Jennings in Animal House and light one up. Maybe he can meet up with Josh Howard after a game and they can relax together.

While I believe anyone of those three suggestions would help the Spurs win, the best solution is to find Greg Popovich. He isn't a very outgoing individual so there isn't many leads, but I have a hunch he could be in North Carolina with his main man Larry Brown sippin on some wine while trying to figure out the Bobcat mess before coming back to San Antonio to lead a miracle comeback into the playoffs.

Or maybe he is at the barber shop...