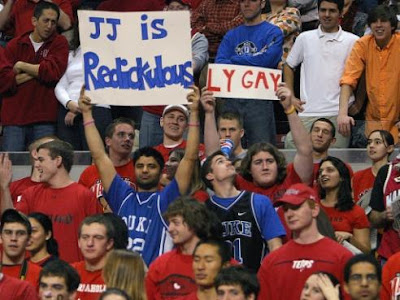 Ed. Note: Maybe I should be breaking down who SIU should match up against Duke's Kyle Singler and Gerald Henderson. Or writing about how this is Chris Lowery's chance to show the nation that his basketball program can compete with anyone. Actually, I should probably be doing homework.

Instead, I'm taking on Duke the only way I know how: By ridiculing them. First up on the whipping's list: JJ Redick and his crap-tastic poetry.

A long, long time ago in a blogosphere far, far away I was a poet. A pretty darn good one if I may say so myself. That's why I'm taking this platform to rip former Duke star guard J.J. Redick's poetry, which is Exhibit A why the Duke Blue Devils are lame.

As I decide to fulfill my life's strategy
The devil insists on trying to battle me
I meet him in an empty field on the high plains
He throws temptations my way to inflict internal pain
Life and death matters, this ain't no game
It's mind over matter, the power of my brain
He thinks I'll give in if my muscles start to strain
He believes I'll submit to the evil of society's frame
And benefit from notoriety's gain
He says I don't have to properly train
and that he'll give me all the fame
and everyone will know my name
But I think he's insane
'Cause I know the truth- to gain is to give
To have pain is to live
So I call on my heavenly Father's name
And slowly watch the thunder and rain subside
I'm finally able to push the temptations aside
I went blow for blow, I went face to face
Now the devil knows, I'm able to escape
Not by a back door or an alternate route
I saw the middle high ground and I ran right through

Are you kidding me? Is this poetry? Read it out loud. Look in a mirror and read it aloud. It's lame. It's all sing-songy and rhymie (yes, I just made up a word, but only to prove my point) and of course, bad. Maybe JJ should rap it out. Think he's got enough power to get Lil' Wayne to hop on a remix?

No bandage can cover my scars
It's hard living a life behind invisible bars
Searching for the face of God
I'm only inspired by the poems of Nas
Because the truth has carved my life's patterns
The reality of pain, and the joy of laughter
My hopes and dreams shattered
by the miscalculation of my own situation
It's difficult to keep my nerves patient
Facing the forecast of fears
that none of my peers have ever been faced with
I wanna reach the top floor, but I'm stuck in the basement
With not enough juice to burst through
the chains that have shackled my brain
It seems my dreams have carried me to a separate peace
apart from reality
Society is allowing me to grow into the man I'm destined to become
But how can I move when my entire skeleton is numb?
Numb from the obstacles that I've been given
Suddenly the bars connect to walls
and I find myself contained inside life's prison

All you need to do is read the first few lines and realize this is Redick's attempt at being emo. Someone get the former ACC 3-point assassin some make up, black nail polish and a My Chemical Romance CD. Seriously, JJ, do you have a writing coach?

My life story is read in poetic stages
I was once weak-minded, now I'm courageous
The cause and effect of a thousand actions
The mathematical breakdown of micro-fractions
It's difficult to fathom the coming of the rapture
What if I awoke in an empty pasture?
Suddenly every ounce of passion had been depleted
And all my determination had been defeated
The rain pours, my tears fall
The pain subsides, I stand in awe
A lightning bolt strikes, I feel a sudden energy
Thunder clouds approach, I can't run from destiny
A tornado tears me down, but I will stand again
My life is a hurricane, but I'll weather it to the end

I love the weather references in the end though ... did your teacher tell you to write a weather poem? That's cute. Way to go Mr. Redick, you get a gold star!

Ten minutes pass without a notice
Nine times in my life I've felt hopeless
Eight friends I've lost on purpose
Seven broken bones my skeleton felt were worthless
Six days of work, but only one day of worship
Five ways I feel pain, but that's only on the surface
Four corners of the earth, all touched by God's churches
Three sisters have influenced my poetic verses
Two years that I completely lost focus
One brother for which I wrote this
Ten minutes pass without a notice

This is the only poem that I thought was passable. I like the idea of a countdown poem, so that's cool and I like how it's wrapped up nicely in a bow. But Ten minutes pass without a notice ... he must be talking about life at the end of the Orlando Magic's bench.

I can't see what my future has in store
but I move forth with the strength of a condor
The courage of a warrior
The commitment of an American soldier
Despite this weight on my shoulder
my inner forces circulate to form
a nucleus of an unbreakable bond
These words describe the soundtrack to my life's song
My mind and body united like the Colors of Benneton
My destiny isn't told by the creases of my palm
A sharp thorn once cut my soul
The blood flowed
But no bandage would cover the wound
I couldn't help but stare at the distant moon
Waiting for a resolution to come at an instant soon
I asked the Lord, "What am I to do?"
He said, "Son, I made the sky blue
The rain falls because of me
Leaves change colors on a fall tree
I was the inspiration to Martin Luther King
I'm the reason Ray Charles could sing
I've changed others through and through
And my son, I'll do the same to you"

Damn, JJ got really preachy on us. It's hard for me to blast something with MLK and Ray Charles references ... but it's so damn cliche , it's unnecessary. I'd tell Redick to stick with his day job, but he really doesn't get off the bench often, does he?

I guess I can't hate. He gets paid millions of dollars to sit on a bench. That's the kind of job I dream of having one day.