Why the idiots shouldn't run the asylum... 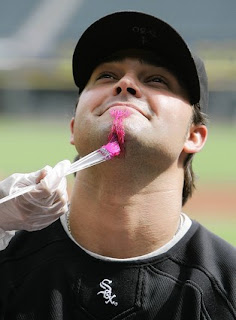 Bloggers have come a long way from the days in which they sat in their parents basements, going on internet dates and plotting out another sequel to "Revenge of the Nerds."

Except for this guy.

It's frustrating because as a Cubs fan, I go to his site not to get a hot stove update, but instead for a laugh.

I really didn't want to do this, but this post was the last straw.

I guess we can start with the top half of the post in which he incorrectly spells CHRIS DeLuca's first name - which he spells correctly in the first line. Now this could be just an oversight, but it happens all the time. It's frustrating. I know I'm not perfect, but there are too many grammatical and spelling errors that frustrate the heck out of me.

OK, now that we've got that little pet peeve of mine out of the way. Let's get to some content. He wants the Cubs to think about a deal acquiring Javier Vazquez and/or Nick Swisher of the Chicago White Sox.

First of all, why would you want to pick up a player in which the manager calls out said player for not being a big game pitcher. Especially when your goal is to win the ultimate big game: The final game of the World Series.

But I'll get over that because if you can throw out Vazquez's talents over 30 starts in the regular season you're going to get a pretty good season out of a very talented arm.

But let's move on to Swisher.

"Nick Swisher is also a very interesting scenario. Swisher is a switch hitting First Baseman and Outfielder that could really benefit the Cubs."

How? As a first baseman? Is he really better than Derrek Lee? No. Next question.

"He does not hit for a high average, just a .244 lifetime hitter, but does have a decent OBP of .354 throughout his career. He is a good power hitter( hitting 21+ homers since 2005) that would look nice batting anywhere in the lineup. He is a decent fielder with a .991 fielding percentage throughout his career. Ichiro's is .993 to do a comparison."

Look the .354 career OBP is less than inspiring. Want to know what's even less inspiring? The .332 OBP he posted last season. He's a decent fielder? Did he really just compare Nick Frickin Swisher with Ichiro, who can play right field and center field, has a cannon for an arm and "more range than a Texan" as rapper Ludacris once eloquently put it.

Swisher doesn't have the range to play center and he's not that much better at first.

"He would be a solid addition to this team and the Cubs should add him to their list of guys that consist of Giles, Hermida, Abreu, and Ibanez."

.219/.332/.410 sounds like a great addition for a team that didn't hit, get on base or slug anything but a water heater in their brief playoff appearance (if you would call it that) against the L.A. Dodgers.

Let's bring back Cesar Izturis while we're at it.

He goes on to note that Swisher is owed $20.05 million over the next three years. Sounds like money well spent for a guy who is just a "good clubhouse guy."

I hope Kevin Millar looks at this post and basis his free agent contract based off what he learned about Swisher's contract in this post.