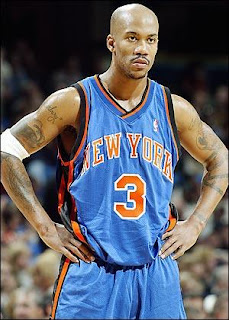 Quotable? Is that an offshoot of his affordable shoe brand?

Quotable is what fallen star Stephon Marbury has become now that he's the official victory cigar* of the New York Knicks.

*victory cigar. def.: Player used only in garbage time of a blowout win.

Starbury's benching has got him saying all sorts of crazy sh*t (via ESPN):

"Looking back at the last two years, I kind of liked Larry Brown."

No one likes Larry Brown. No one, except Detroit Pistons when they won the NBA championship under his reign.

Shoot, it was Larry Brown fighting his former roommate after he transferred from UNC to Duke which started the Carolina-Duke rivalry. Again, no one likes Larry Brown. Except the Pistons and apparently fellow UNC grad Michael Jordan. Oh, and now, Starbury.

"I kind of liked Larry Brown."

Alright Steph, we get it. You've got a man crush on Larry Brown. Wait you have more to say?

Oh man, that was too much information. I should have left this interview while I still had the chance.