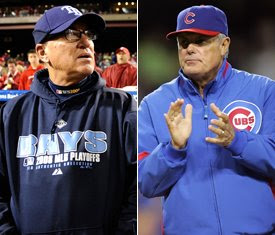 The Chicago Cubs saved all their wins for the month of November.

Or so it seems.

Two days after catcher Geovany Soto took home the National League's Rookie of the Year award, his skipper, Lou Piniella, was named the senior circuit's Manager of the Year.

Piniella led the Cubs to 97 wins and their first back-to-back playoff appearances since 1906-1908, but was unable to coax a playoff win for the second straight postseason.

Contrary to popular belief, the 97-win campaign wasn't just the result of recent off-season spending that made "making it rain" look like a light donation. Instead, Piniella's mind was in overdrive as he put together a strong lineup, managed a sometimes shaky bullpen and motivated a team that won the ultra-competitive NL Central Division.

Platooning Jim Edmonds and Reed Johnson, rebuilding Carlos Marmol's confidence after his midseason struggles, handling the fragile Kerry Wood and handling the more-fragile psyche of Alfonso Soriano were only some of the tasks Piniella excelled at this season.

As for Maddon, who earned all but one first-place vote, his task was much more difficult.

He turned around a franchise synonymous with losing into the beasts of the American League East, knocking the Boston Red Sox into the Wild Card and New York Yankees out of the playoffs.

Maddon molded the Tampa Bay Rays' young talent into his image of what a real baseball team should look like and each player bought in.

It wasn't just AL Rookie of the Year Evan Longoria, budding superstar center fielder B.J. Upton and aces Scott Kazmir and James Shields. It was more than just them.

It was veteran closer Troy Percival and outfielder Cliff Floyd. It was guys like Jason Bartlett, Wily Aybar and Dioner Navarro. It was a team effort, from top to bottom.

And Maddon led the charge as the Rays marched to the World Series to the beat of one drum.

It looks like the Baseball's Writers Association got it right, this time.