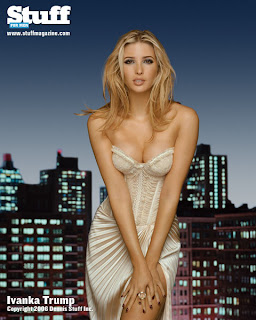 Speaking of afternoon delights, it's Ivanka Trump. Yes, she's the daughter of the ever-annoying Donald Trump but that's something I can get past.

Now I'm not saying I'm a gold digger, but if a pretty blonde leads you to some green you've got to follow, right?

Now I know the "American Dream" is based on working hard, coming from the bottom, making lots of money and being seen with the movers, shakers and beautiful people.

But honestly, if you were able to bypass all that hard work and land a boatload of cash, a beautiful woman you would do it in an instant.

I know I would.

Enough of my ramblings, let's move on.

SIU starts slow, then rolls. The SIU men's basketball team got off to a slow start, but the team's depth led to a strong second-half as the Salukis coasted to a 66-52 win against California (Pa.).

Sophomore forward Carlton Fay dropped a double-double, scoring 16 points and pulling down 11 boards in the victory. It's early in the season and SIU has yet to play a Division I opponent, but Fay is playing the way everyone associated with Saluki hoops expected him to play from day one.

But coach Chris Lowery said that he's happy that Fay's doing it now because the team needs it.

He wasn't the only contributor, the SIU bench outscored the Vulcans 31-11, led by freshman guard Kevin Dillard's 9 points and 9 assists and frosh center Nick Evans' 8 points and 5 rebounds. The energetic effort sparked the Saluki win.

SIU plays UMass tonight for a chance to go to New York City and face Duke at Madison Square Garden. The Minutemen beat Arkansas-Monticello 90-71 in the 2K Sports Classic opener.

Rose's show is not enough. Did you know the Atlanta Hawks are undefeated? Not winless. Undefeated. Did you know that? Of course you didn't because the best basketball in the state of Georgia occurs in early March when the SEC Tournament comes to town.

The ATLiens were paced by each player in their starting lineup scoring in double figures, led by Al Horford's 27 point 17 rebound performance.