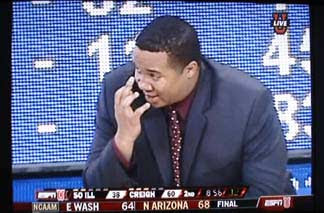 Chris Lowery has a message for the haters, via Deadspin.
It's only an exhibition game, but I have high expectations for the SIU men's basketball team tonight and for the rest of the season.

Lots has been made about the addition of players such as Kevin Dillard, Ryan Hare, Anthony Booker, Torres Roundtree, Nick Evans and Justin Bocot who are all skilled offensive players that Saluki fans (myself included) expect to carry the offensive load for a school known for getting in your shorts defensively.

I'm here to temper that excitement, just a little bit.

Dillard and Bocot were prolific scorers in high school, each averaged more than 20 points per game in their senior seasons in high school. Booker is a talented post player who can step out and drill outside shots too. Hare and Roundtree have been described to me as slashers on the offensive end, which it would be nice to see someone other than senior guard Bryan Mullins penetrating to the hoop.

With that said, they're all freshmen. Except for Bocot, who is technically a sophomore.

But I do expect to see a quality product on the court in the form of players working hard and bringing the ideals of "Floorburn U" back to the SIU Arena.