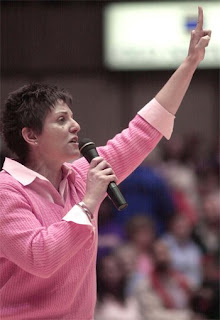 One night after the SIU men's basketball team opened its exhibition season against Missouri Southern, the women's squad will take its first crack at the new season as it hosts Christian Brothers.

While it seems like a mismatch on paper - you know, an entire basketball team facing only two brothers - I wouldn't look at it that way.

CB features former SIU stand-out freshman Tanaeya Worden, who was one the many Salukis who left after last year's debacle of a season.

But don't fret Saluki fans, the reinforcements are here and we'll find out soon whether they're up to par or not.

With the right "bus drivers" in place, SIU could come close to repeating the kind of success it did when it won the Missouri Valley Conference title a few years ago.

Maybe they won't have that many wins or a conference regular season title, but they could (and should?) be competitive.

And sometimes, that's all I want out of my teams.

hmmm did the photographer give you permission to use that photograph? I bet they could sue....

Emily has a good point that I've been meaning to bring up. You can't just grab copyrighted pics from the web and post as if they are your own.