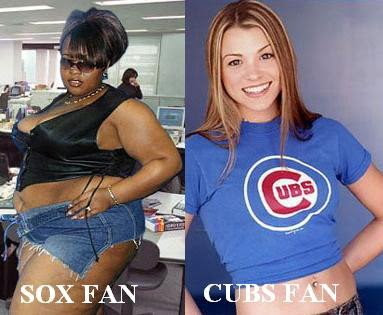 Ozzie loooooves his White Sox fans! (via Photobucket)
The White Sox took two of three from the Cubs this weekend in the battle of whack Windy City baseball. These teams might play a make-up game at Wrigley in September, setting up a situation where one team could theoretically serve a blow to each other's playoff chances. But we won't talk about that until both teams are over .500.

Ozzie Guillen continues to live in bizarro world. First, he welcomed the Cubs to the world class facilities of the South Side, which included meth labs, crack spots and the ever so popular 35th Street underpass. Then he goes on to say Sox fans are not stupid like Cubs fans. (Remembers the Ligue's jumping Royals first base coach Tom Gamboa. Then other fans jumping umpire Laz Diaz. Then other fans harassing Craig Biggio's wife at teh 2005 World Series.) You're right Ozzie, White Sox fans aren't stupid. They're just embarrassing. [Chicago Tribune, Paul Sullivan]

Phil Rogers' stupidity continues. "Get Carlos Zambrano out of here, even if the Cubs have to give him away. He's not the guy you want as the ace of a curse-busting team, and at this point, it's wishful thinking that he'll ever mature into that guy. Proving that I did not attend Kellogg, Wharton or even the Acme School of Business, I offer this proposition for Jim Hendry: First thing Monday morning, put Zambrano on waivers. If anyone claims him and the $62.75 million left on his contract, which runs through 2012, immediately trade him for whatever is being offered, from a bag of balls to a 32-year-old minor-leaguer."

I won't even justify that with a witty response. [Chicago Tribune, That One Idiot]

Random Thought: This tidbit in the Trib suggests Aaron Miles could go on the disabled list soon. The former Cardinal is batting .203 this season with the Cubs, which begs the question: When was he ever able? Just cut bait.

Random Thought II: In theory, the Cubs traded Mark DeRosa for Aaron Miles and three minor leaguers. And unless those minor leaguers become Hall of Famers, Cubs fans will never live this down.