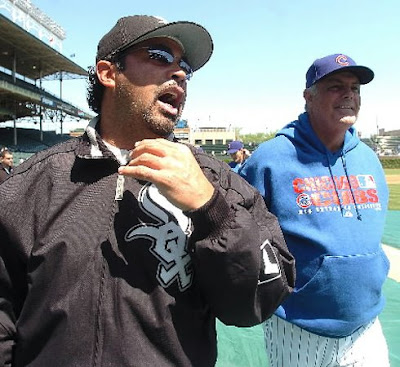 Even though they only count for 0.03 percent of the schedule, the six games between the Cubs and White Sox is each hyped as it is Game 7 of the World Series. And with both teams floundering around the .500 mark, these six games might as well serve as some kind of postseason play.

Personally, I always wondered why something more than bragging rights was on display. Maybe a Harry Caray bobble-head should go to the winner of each series. Or the rights to have Steve Stone as an analyst. How about the loser has to lug around Sammy Sosa's boom box around until the next series.

Enough of what I have to say, here's what the rest of the Web is saying about the next installment of mediocre Chicago baseball.

Dan McGrath stirs the pot: "The Cubs have a slightly better record and are a little closer to the division lead as the squads prepare for the first of their two crosstown skirmishes, beginning Tuesday night at Wrigley Field. But I believe the White Sox have a better chance of playing on into October." [Chicago Tribune]

The Big Hurt: Be patient with Bradley: "''Milton shows up in the second half. We wouldn't have gotten to the playoffs in Oakland [in 2006] without him. Don't be too quick to judge Milton Bradley. The guy has a flair for the dramatic. He was a teammate of mine, and I thoroughly enjoyed playing with him.'" [Chicago Sun-Times]

The obligatory "it's just another series" blog post: "Each team's main goal is to win their respective division championships. Considering the fact that the Cubs and Sox are placed in different leagues, the outcome of one team has no bearing on the other. Sure, winning these next three games are important because they count towards the record. But, there is nothing sweeter about beating the Sox than anybody else." [Ekim52 @ MLBlogs]