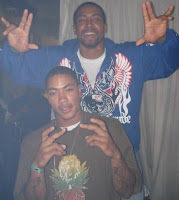 Since being drafted with the No. 1 overall pick in the 2008 NBA Draft by his hometown team, the following has happened to Derrick Rose:
All I've heard is that Rose is a great kid and a good soul, but this bothers me a little bit. However, there is a part of me only cares that he is the reigning NBA Rookie of the Year, a dynamite basketball player and the one man that can throw an entire city and franchise on his back and carry it back into national relevance.

Without having to throw up gang signs, of course.

Very little is known of this photo other than D-Rose looks to be flashing the Gangster Disciples sign. Who's that guy in the background? When was this picture taken? Where was it taken? Why is it so smokey?

All things that should be found out before the media takes Rose out to the tool shed, bends him over one knee and gives him a paddlin' he'll never forget.