The NBA: Where we still play for the fun of the game happens 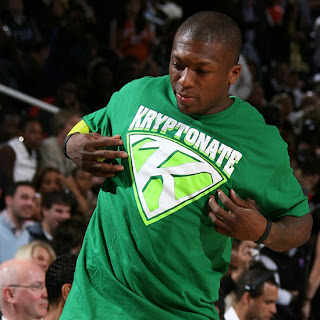 If you want to talk about football at this time of year, the destinations of troubled stars Terrell Owens and Michael Vick are sure to come up.

If you want to talk baseball, steroids will definitely come up, because that is all that ever comes up now of days in America's pastime.

But if you want to talk about NBA basketball, talks of players wearing Superman capes, winning HORSE games and throwing down silly dunks are prevalent. It's one of the many great things about the NBA and one reason the All-Star weekend is successful.

The All-Star weekend gives the league a chance to showcase the skills of its best players and their personalities as well. Anyone who makes arguments about how the dunk contest was so much better when players like Michael Jordan and Dominique Wilkins were participating is watching the contest for all the wrong reasons.

The dunk contest was never about who was the "best" dunker. It has always been about being creative, having fun and giving the fans a show. All-Star weekend continues to provide plenty of entertainment and shows fans a side of the players that makes them seem like everyday people.

The weekend usually always has a great story as well. This year it was Bill Russell who took center stage and was rightfully awarded. The Finals MVP award will now be known as the Bill Russell award and you could tell the big man was genuinely moved by the honor.

Russell recently lost his wife, but you could tell from the brief appearances he made on TV during the weekend that the All-Star weekend was a breath of fresh air for him in a very difficult time. It's the feel-good stories like Russell's that make the weekend so special.

To me, the NBA has the perfect All-Star setup and I think other sports could learn from it. I have always thought that the MLB could have a special All-Star weekend, but it turns out to be boring most years. Instead of playing a serious game between the AL and NL that decides home field advantage in the World Series, they should let the players have some fun.

There is no need for Pete Rose to charge into home plate and knockout the catcher. Instead the game should be about fun. Baseball is considered America's pastime but it has been marred in controversy so much the last few years that it has almost been totally destroyed.

For one night only, I say give the fans that nostalgic baseball. Sell 50 cent hotdogs during the game and let the players goof off for nine innings and have some fun. There would be no need for steroids this night, cause no one will care if there is a homerun. In fact, I would rather see Manny lay down a bunt and run to first base while Joe Mauer overthrows the first baseman just because for one game, it doesn't matter.

I am thankful for the NBA year round, but especially during the All-Star weekend because it is such a treat to watch. Hopefully other sports will follow suit, especially baseball, (could you imagine a skills challenge with Torii Hunter?)

So enjoy the game tonight, but then it's back to business for the Association as my Milwaukee Bucks try to finish strong in their playoff push and the Chicago Bulls just try to stay relevant.