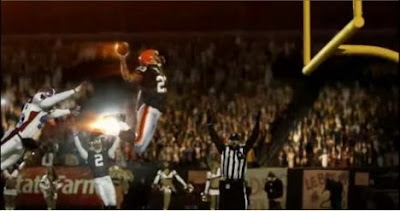 Photo Credit: Sparty & Friends
Ever since the LeBron 1.18.09 commercials began to surface, I have been intrigued.

But I had no inkling on what it could be.

Was he going to announce the loophole in his contract that allows him to opt out after the 2009 season? Maybe it was the announcement that the Cavaliers offered him a blank check to stay in Cleveland forever? Or possibly it was a Maury-style presser in which LBJ announces the paternity tests were in and he was not the father.

Instead, LeBron James announced he would be signing with the Cleveland Browns.

In a fictional kind of way.

Plenty of leakage of pictures and video of LeBrown making his NFL debut with his home town team. Catching passes. Blocking field goals. Doing some sort of And-1 football stuff. All for a frickin' State Farm commercial.

Poor Browns fans. They ran through more quarterbacks in one season than the Bears have in 10. Wide receiver Braylon Edwards went from All-Pro to no show. And like his namesake in that Shakespeare play, Romeo Crennel was off'd when it was all said and done.

And then, for a few dollars in advertising revenue, LBJ23 has the nerve to toy with the hearts of football fans that will see their former franchise battle for the AFC Championship tomorrow.

And to be honest, the only person I could think about when I checked out these links was SIU sports information director Tom Weber, an avid Browns supporter who always takes notice when I wear my uncle's Browns hoodie to interviews.

I'm sure he would appreciate the opportunity to line Edwards to the right, James wide to the left with Brady Quinn tossing bombs to each.

Instead, LeBron will continue to toy with the hearts and souls of Cleveland fans.

What's next? BronBron batting for the Indians?