Peaks, Valleys and a fantastic finish in St. Louis 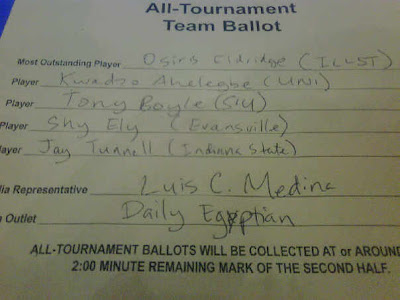 Why don't these pens come with spell check?
Team triumphed over talent in the Missouri Valley Conference Tournament championship game.

But it was not because of a lack of effort by said talent.

And by talent I mean Illinois State guard Osiris Eldridge.

After a scoreless first half that saw the Valley's preseason player of the year chuck shots left and right and come up empty, Eldridge played like a man possessed. He scored a game-high 21 points and drained five three-pointers, all in the second half. A couple of "O's" three-balls came from beyond the NBA's 3-point line that was painted on the Scottrade Center floor.

Three things came to my mind during Eldridge's stellar performance:
Eldridge took the game into his hands on both ends of the floor. He grabbed six rebounds, swiped two steals and collected two blocks -- one of which came against UNI's 7-foot-1-inch center Jordan Egelseder.

Yet, his performance was not enough to propel the Redbirds to a win which would have secured the team's first auto-bid to the NCAA Tournament since Rico Hill wrecked havoc on his Valley foes in 1998.

Despite the "M" on my credential, I became a fan of Osiris Eldridge as he drained jumper-after-jumper and made defensive stops one after another. Still wearing a pair of retro Air Jordans, Osiris invoked the memories of His Airness as he soared and scored when his team needed it the most.

But unlike the six storybook endings M.J. wrote in Chicago which ended with a Grant Park rally, Eldridge came up painfully short.

I am ready to accept the rest of the nation on the Osiris Eldridge bandwagon. He is the best player in the Valley and, dare I say it ... Stephon Curry.

Great job covering this tournament and I totally agree with your ballot.