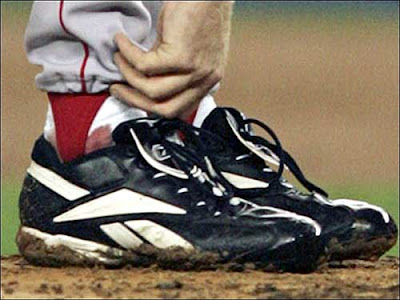 Pitcher Curt Schilling, who was rumored to be interested in pitching for the Chicago Cubs or Tampa Bay Rays after some rehab this year, has decided to call it quits ... via his blog.

Of course, his blog is down ... probably because he's getting so much traffic. But believe me. If not ... a "real" media outlet (ESPN) is reporting it.

Personally, I was hoping The Big Schill had one more bloody sock left in him, especially in Chicago. He became a folk heroin Boston, winning two World Series titles in his time with the Red Sox. If he could have helped the Cubs break the longest title drought in the history of man kind, he would have been a deity.

Instead, I'll wait for the Jake Peavy rumors to start again so I can be mad at Cubs GM Jim Hendry for not getting that deal done in November.