Memphis Madness: A return to fandom 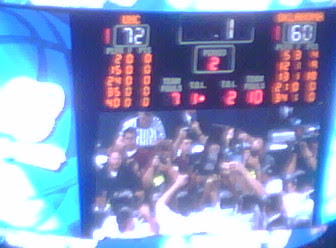 Since November 2008, I have been doing something very special with my life: covering the Southern Illinois men's basketball beat. Prior to this season's 13-18 disappointment of a season, Saluki basketball was the prime beat to cover for a sports writer.

You're talking about a team that made the NCAA Tournament from 2002 to 2007 and had a pair of Sweet Sixteen appearances, to boot. Southern was among the prestigious mid-major programs in the nation, garnering accolades from local and national college basketball braniacs. However, that all seemingly disappeared when "Floorburn U" went the way of 8-track players, bell bottoms and affordable gasoline prices. Still, I enjoyed myself on the beat.

But to be honest, at times, I felt empty. There were times in which I missed chanting, cheering and heckling opponents. Basically, I missed being a fan. So when I got the opportunity to be a fan again, I jumped at it. However, I didn't wear that familiar maroon Dawg Pound shirt. Instead, I went back to my roots, packed up "Ball Force One" and headed to Memphis, Tenn., to see my favorite college team growing up, the University of North Carolina.

And of course, the Tar Heels didn't disappoint.

UNC punched itself a ticket to the Final Four in Deeeeeetrooooiiiiit, Miiiiiiiiiiichigan thanks in part to a stellar performance by the South Regional's Most Outstanding Player, Ty Lawson, and all-region nominee Danny Green. Defending National Player of the Year Tyler Hansbrough was a non-factor on the offensive end, but he did a good enough defensively on this year's projected POY Blake Griffin.

Sure, the probable No. 1 pick secured a double-double, but did most of his damage when Hansbrough wasn't guarding him. In the end, Griffin's offensive output wasn't enough to overcome the better team.

As a fan, it was fun. I got to chant "Let's Go Tar Heels" and partake in the volleyball toss chant when one side of the arena yells "TAR!" and the other side yells "HEELS!" Needless to say, there was plenty to be happy about for fans repping that familiar Carolina blue hue.

In the end, it was worth missing a day of work. If that game taught me anything, it is to take advantage of every opportunity you want to take.

Life: Just Do It.