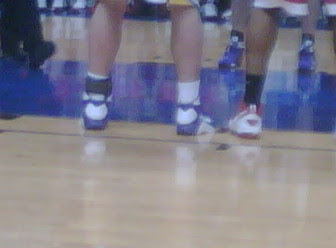 Ankle Bracelets: Don't go to the Big Dance without it.

Do not fall in love with individual performances when searching for NBA talent. I'm look right at you John Paxson. Tyrus Thomas is really working out for the Bulls, right?

But there are several NBA-ready talents that could shine in March. Here they are.

The Panthers enter the NCAA Tournament in an all-too-familiar role. Playing the underdog to a favored Matt Painter squad. But unlike the 2003-04 season, Painter is leading the Purdue Boilermakers ... not the Southern Illinois Salukis.

UNI (23-10) wouldn't be where they are today if not for the contributions of O'Rear, who won the Missouri Valley Conference's Sixth Man of the Year Award. However, it isn't the Nashville, Ill., native's 5.4 point per game average that has me thinking NBA prospect.

O'Rear and a teammate pleaded guilty to committing a fourth-degree theft in before the season. Quick and sticky hands like that could catapult O'Rear's career in the Association.

The sharpshooting guard's specialty on the court is hitting the three, no question about it. However, off the court, his specialty is (allegedly) hitting women.

If Devendorf can be as accurate with the 3-ball as he is, say, maybe smacking around P.J. Carlisimo if he gets another NBA coaching gig, then the 6-foot-4-inch guard should be fine in making that transition. Until then, be wary when an announcer takes note that Devendorf is going for the throat, or that Syracuse is looking to deliver a knockout punch.

The Tigers' point guard might have the most on-the-court talent, but his off-the-court troubles help him land on this list.

Tyreke Evans told police he heard two gunshots as he drove away and saw his cousin "putting a brown-handled, silver handgun into the front pocket of his hooded sweatshirt."He told police that he remained with his cousin for at least 20 minutes after the shooting and overheard a phone conversation regarding the whereabouts of the gun.

Because everyone needs a getaway driver ... except for former New Jersey Nets big man Jayson Williams. On second thought, maybe he does. It's just not the kind of job Evans might want to take once he finishes his four years of eligibility.