What's up with the Blue & Maize? 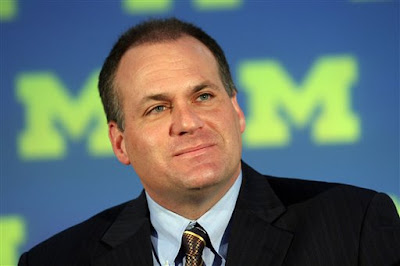 It's OK to smile, Rich. You're getting paid well for this.

Somewhere, the powers that be at the University of Michigan must be looking for loopholes because the Rich Rodriguez Experiment isn't just not working ... it's failing.

One day after finally signing his six-year, $2.5 million a year contract with UM, the Wolverines dropped a 35-21 decision to Michigan State at the Big House for the first time since 1990.

If UM is losing to the likes of Toledo and Michigan State, imagine the whooping they'll receive when they roll into Columbus, Ohio to face The Sweater-vest and the rest of the Ohio State Buckeyes.

The loss moved Michigan to 2-6 overall and 1-3 in Big Ten play. The Wolverines have lost four games in a row and are winless in the month of October for the first time since ... who knows, that's a stat I'm too lazy to look up.

The point is this whole Rich Rod thing isn't working out and it doesn't look like it's going to any time soon. Michigan's AD is preaching patience. Why? He's part of the group that helped push Lloyd Carr out the door. Patience, really? I don't wanna hear it.

But do you know what I don't want to hear: that it's going to take time because RR doesn't have the kind of players to fit his system.

Lennon came to Carbondale with the task of replacing Jerry Kill, the man who single-handedly saved Saluki football from not only the depths of college football hell, but from extinction as well.

Kill's team's can be described in one compound word: smashmouth.

SIU became Tailback U as it ran the pill down its opponents throats on a yearly basis, and its best case study has been the emergence of New York Giants main-man Brandon Jacobs.

But I digress, so I can make my point.

The point is that Lennon has turned SIU's smashmouth offense on its ear by implementing a variation of the spread offense. Each week, the Salukis unveil new wrinkles as first-year starting sophomore quarterback Chris Dieker continues to learn the system.

Dieker won't be confused for West Virginia's Pat White or Florida's Tim Tebow, but he has proven to be mobile enough to elude the pass rush and whatever he lacks in agility, he makes up in arm strength.

Not only has he continued to keep the SIU offense potent as ever, Lennon & Co. have revamped the Salukis' entire defensive system by placing Kill's players in Lennon's linebacker friendly 3-4 defense.

Now, guys like Ryan Patton, James Cloud, Brandin Jordan and Chauncey Mixon are reaping the benefits as the SIU linebacking corps are four of the top five tacklers on the team.

And before you say "oh, this argument isn't valid because SIU doesn't play anybody," allow me to kick it to you with some real talk.

The Missouri Valley Football Conference isn't a joke. In fact, it's equivalent to the FBS' Southeastern Conference.

The Valley has four schools ranked in the Coaches Top-25 poll (Northern Iowa, SIU, Western Illinois and North Dakota State) with South Dakota State receiving votes in the Coaches and Press polls. The newly-rebranded MVFC has also sent multiple teams to the playoffs (that's right, PLAYOFFS) since I've been a student at SIUC.

Did I mention that Brandon Jacobs went was a Saluki? So was Bart Scott. Rodney Harrison went to WIU. Kurt Warner went to UNI.

The point is that talent is everywhere and all a coach has to do is utilize it.

It's apparent to me that Rich Rodriguez isn't making the most of the talent at Michigan.

On the other side of the coin sits Dale Lennon, who sits atop the MVFC with a 5-2 record overall, a 4-1 record in conference play and all while making $2,300,000 less than Rich Rod.