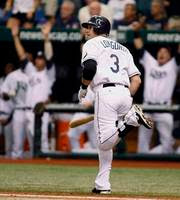 The Chicago Cubs weren't the only Chicago baseball team stumbling out of the gate to start the playoffs.

Javier Vazquez welcomed Tampa Bay Rays third baseman Evan Longoria to the playoff party by allowing him to go long (twice) in the Rays 6-4 victory against the White Sox.

At least the White Sox believed in scoring runs at some point.

Dewayne Wise hit a three-run homer and A.J. Pierzynski and Paul Konerko were in 2005 form, combining to go 4-for-7 with two runs scored.

Luckily for the Sox, the series just started and have the face of the franchise, Mark Buehrle, taking the bump for Game 2.

If the Sox can somehow come away with a split in F-L-A, they could spring an upset when they return to U.S. Cellular Field.