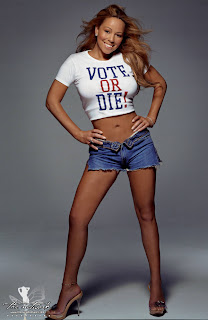 First of all, let the record show that Nick Cannon has no business being married to the beautiful (and a little bit loco) Mariah Carey.

Seriously, Mariah can sing her butt off and look good in it. Nick Cannon had that one song with R. Kelly and that other song with a bunch of rappers.

At least he has Drumline money to fall back on.

Moving on to the Dosage.

The Phreakin' Phils Are Having Phun! Through four NLCS games, Brad Lidge has proven to be the anti-Mitch Williams.

Lidge converted his first four-out save this season and he did it at a perfect time for Philly fans as the fans of the Illa-delph's baseball team were rewarded with a 7-5 come-from-behind victory.

The Dodgers bullpen (normally good) allowed five runs in four innings of work to a powerful Phillies offense that is one win away from its first World Series since 1993.

Remember the Wild Thing? Here's hoping Brad Lidge has a short memory. Remember the last time he was in a LCS clinching game?

Rays romp in Boston. To quote Eminem in the great movie "8 Mile": "Now who's afraid of the big bad wolf?"

Not the Tampa Bay Rays.

In their first playoff appearance at Fenway Park, the Rays looked like a group of veterans, knocking around Jon Lester (surprising!) to the tune of five runs (four earned) on eight hits in 5.2 innings. Then the Rays knocked around Paul Byrd (not so much!) for four runs (all earned) in 3.1 innings.

Oh yeah, and B.J. Upton is turning into an October star.

His summer troubles were chronicled here at TBDS.

The good news for the Rays center fielder is that it's the fall.

He's batting .308 after a 2-for-5 day at the plate in which he knocked in three RBIs, scored a run and hit a loooong home run off of Lester in the third inning.

The Rays are up 2-1 in the best-of-seven series.