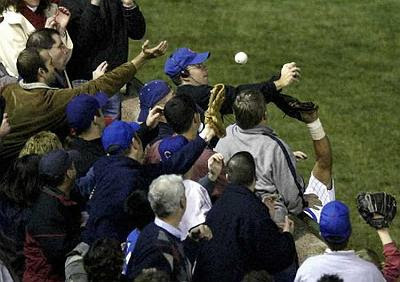 I knew it was coming because it's unavoidable.

It's October 14th...do you know where your favorite fans are?

It's the five year anniversary of the day one of our own helped turn a dream season into a nightmare.

I kinda think it's funny that there is no NL playoff baseball tonight. Maybe the head honchos at the MLB expected the Cubs to be in the NLCS and wanted to keep the curse-conscious North Siders free of that sickening reminder.

It didn't matter, the Dodgers took care of that.

So do you remember where you were?

With the Cubs having a 1-0 lead and news that fans were gathering around Wrigley Field in anticipation of a celebration, I felt the need to hop on a train and head to Clark & Addison. I had already missed the celebration after the Cubs clinched the NL Central Division title and the post-NLDS party so this was a must-happen.

My parents were in Las Vegas, two days after the most awesome wedding in the history of weddings. I called my mom and asked if I could go down to Wrigley (I was a senior in high school and spent most of my days on house arrest) and she said yes.

On my way to the train, my buddy John and I heard Bernie Mac sing the 7th inning stretch and sing "root, root, root for the champ, champs!" and my initial reaction was "he shouldn't have said that" but I was assured that it didn't matter because Mark Prior was on the mound.

The Cubs responded with two runs and took a 3-0 lead into the 8th inning.

And then with one out in the top of the 8th inning tragedy struck.

And yes, for a while I blamed Bartman and I had a good reason.

Think about it. Where he was sitting he should have seen the following:
Or maybe he should have taken a hint from the radio broadcast he was listening to on those goofy headphones.

If I was in Aisle 4 Row 8 Seat 113 I would have immediately located the ball and gotten the f*ck out of the way.

Most baseball fans would.

Now Bartman shouldn't get all the blame. So allow me to give the blame to the proper people:
I think I'm done.