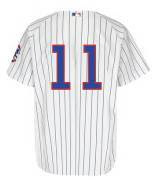 The financial market is in a rut. Some geeks are trying to recreate the Big Bang. There's an African-American running for President and a woman running as a Vice President.

And the Cubs are 11 wins away from winning their first World Series since 1908.

Boy. It really puts things in perspective, doesn't it?

Moving on to today's mini-preview.

A league-leading 97 wins were nice.

So were the 885 runs, also leading the National League.

But beginning today, none of it matters.

For the Chicago Cubs and the seven other playoff teams, it's Opening Day all over again.

Screw the 100 years of suck thing, it's only fodder for columnists who aren't creative or talented enough to find something more intriguing to write about.

Let's talk about the playoff series between 2008 Cubs and 2008 Los Angeles Dodgers.

Why The Cubs Should Win The Series.

The Cubs have a more talented team, up and down the 25-man roster. They have more talent in the everyday lineup and in the starting rotation.

They're motivated, especially after last year's sweep at the hands of the Arizona Diamondbacks.

Lou Piniella's got them focused, as a World Series title in Chicago would make him a shoo-in for a spot in Cooperstown as a manager.

Ryan Dempster was 14-3 at home, and Wrigley will be rockin'.

And not just because yours truly is going to be in the house, either.

Why The Cubs Could Lose The Series.

Now that I got the lazy journalism out of me...

The Dodgers are playing with house money. They're on fire and are led by one of baseball's best managers (Joe Torre) and one of the game's best money players (Manny Ramirez).

Both have something to prove to the East Coast about what they have left in the tank.

What scares me most about this Cubs team is that it's basically the same lineup that was shut down by the D'Backs last October.

That's all for now.