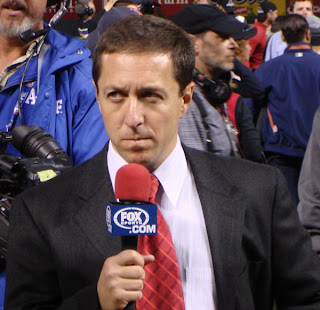 While this may be news to some of you out there living in caves, under rocks or in mom's basement it isn't news to the TBDS team of sportswriters.

It's been a fact since the dawn of time - or at least since Ted Williams was swinging the stick.

And it could hurt them when the free agency market opens up in the offseason.

Per Ken Rosenthal of Fox Sports:

"The trade of left fielder Manny Ramirez and loss of shortstop Julio Lugo to injury left the Sox with a predominantly Caucasian roster. Why bring this up now, with the Red Sox in the American League Championship Series? Well, the free-agent market will open in about a month. The makeup of the Red Sox's roster could be a concern for players they pursue, whether it's this offseason or in the future. ... The Sox's composition is surprising in an era in which rosters are more diverse than at any point in the game's history, even as the number of African-American players continues to decline."

True that. I think it was an ESPN piece a few years that remarked about the declining number of African-American ball - to the point where traditional black universities are giving scholarships to non-black players just to field a team.

"But the Sox carry a special burden. They have a shameful history of discrimination, one that their present ownership group has tried to address. And a perception has long existed among some African-American athletes that Boston is hostile to players who are not white. ... The question is whether the Red Sox will lose players they want because of the makeup of their club, the perception of the city or both."

It would be terrible to lose out on a player that can change the face of your franchise (no pun intended) because of the color of his skin. Isn't this why Jackie Robinson was so important to the game of baseball?

It's almost sickening that this is an issue.

What's with all the new-fangled racism in baseball?

I think it all began with the concept that white players that aren't as athletic as their teammates are scrappy and that distinction only (apparently) goes to white players.

But Rosenthal has a point. We'll see how the offseason shakes out. Likely, this will be a story that drifts away after a while

But maybe it shouldn't.

I'll leave you with this very curious comment from a columnist last year.

Found at FireJoeMorgan.com and reproduced with the help of the BBTF Newsblog Discussion:

"My disinterest in baseball as a kid has lasted all my life. I’m still not interested in the game. I don’t watch it on television or follow it in the newspaper. I know all about Babe Ruth and Lou Gehrig, but today’s baseball stars are all guys named Rodriguez to me. They’re apparently very good but they haven’t caught my interest."