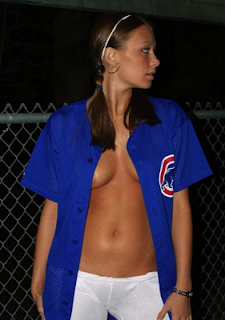 I've always compared being a Cubs fan to having a difficult relationship.

She's cute. She has moments where she makes your day and then there are days where it gets a little rough, but it's OK because you still love her.

She promises she'll take you places you've never been before, and you believe her.

In the end, she's just a tease.

As for the Cubs, they led all of baseball in runs scored.

But scored only six runs in their three playoff games.

They led all of baseball in run differential.

And were outscored 20-6 by a team that had the lowest run differential of any of the playoff teams.

They had the NL's best home record.

And dropped the first two at home in front of the most heartbroken fans in the world.

They had the best record in the NL.

And just like the team with the best record in the AL, they'll be watching at home for the rest of the postseason.

The Cubs did everything right this season.

They won a majority of their games at home and were good enough to be a little bit over .500 on the road.

They turned one man's trash (Jim Edmonds, Reed Johnson) into another man's treasure.

The Cubs even did what was previously unthinkable: they traded prospects for an ace starting pitcher (Rich Harden).

They even had some magic moments, which culmunated in Carlos Zambrano's no-hitter.

But maybe they peaked too early, because in the end, they fell flat on their faces.