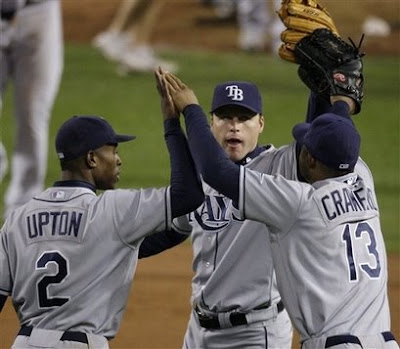 Part two of my series on how I'm jealous of the remaining teams in the LCS. This segment stars the Tampa Bay Rays and Boston Red Sox. Notice: I didn't say New York Yankees.

Raise your hand if you expected to see the Boston Red Sox in the ALCS this season?

(That's a good amount of you. Makes sense, seeing that the BoSox are coming off their second World Series title this decade.)

By a show of hands, how many of you expected the Tampa Bay Rays to be facing the Red Sox in the ALCS?

(No one. Not shocking, seeing that the Rays have been a bottom feeder since entering the league in 1998.)

OK. How many of you folks knew that the Rays changed their team colors, logo and dropped the "Devil" out of their name?

And that's why I am in love with the Tampa Bay Rays.

As a tortured Cubs fan, I learned early to adopt playoff teams when October rolled around so I can keep up with the happenings of my favorite sport, baseball. This year's squad: The Rays.

For the longest time it was the Red Sox because my godfather (Luis Rivera) was a utility infielder for Boston in the early-mid '90s. And I still have those ties and now I have ties to the Cleveland Indians, for whom he now coaches.

The Rays, well, they have a chance to make a young sportswriter look like a genius.

In September, a certain future sportswriter said the Rays reminded him of the 2003 Florida Marlins. They were young, dumb and therefore oblivious to pressure.

Remember when Derek Jeter and the '03 Yanks tried spooking the upstart Marlins by warning them of the "Ghosts of Yankee Stadium."

After blowing up Mark Prior and Kerry Wood in back-to-back starts, the Fighting Fish basically said 'f*ck your ghosts' and pissed all over the Pinstripes and clinched on the Yankees' home field.

Back to the Rays. I'm sorry, I'm off my rocker this morning.

The Cubs need to do what they Rays have done to build a winner. Without the whole years of suck thing because the North Siders got that down pat.

The Rays have built from the ground up. Smart draft choices made by smart baseball people developed by even smarter baseball people and managed by a coach who studied under one of baseball's best minds, the L.A. Angels' Mike Scoscisia.


See a pattern? Young and talented. And that's not even counting the Christmas gift from Steve Phillips and the New York Mets known as Scott Kazmir.

Look at the rest of the roster and you'll find 11 free-agent signees and five players that came via trade.

Notice that Wood is the only former first-round pick to make it through the organizational ranks. Mark Prior earns partial credit in this category.

But where the Rays have succeeded, the Cubs have failed. Miserably.

Let's play a game I like to call 'Who Would You Rather Have?'

Would you rather have...

I could do this forever, in fact I'll do that one day.

The point is if the Cubs want to be a contender over a long period of time they need to start making smart draft choices.