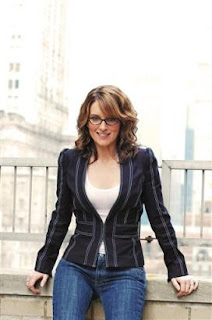 Seriously, there isn't a better day than Friday.

Sure, Saturday's great and so is Sunday. But there is no day I look forward to more than Friday.

To celebrate what will hopefully be a Happy Friday, I bring you Tina Fey.

Yes. I've had a crush on the former SNL starlet in a geeky kind of way since forever.

It's time for the Dosage.

Rose 'terrible' in preseason opener. In a city that is known for gloom and doom, is it too early to panic over the Chicago Bulls selection of Derrick Rose as the No. 1 overall pick?

Rose scored 10 points in his professional debut, but the Bulls were downed by the Dallas Mavericks 110-102 as the Chicago native also turned the ball over six times.

It's too early to judge the Bulls because it is truly a difficult task to evaluate talent in the first exhibition game of the season.

With that said, I'm happy that the Bulls scored more than 100 points. That's a nice start, Vinny Del Negro. Now it's time to hold the opposition under 100.

A Cuban-Economic Crisis. Gas prices are high ant tuition continues to rise, yet my concern about the economy is whether or not Mark Cuban is going to buy the Chicago Cubs.

Cuban, one of the finalists possibly in line to buy the team, said the United States' fledgling economy is slowing down the sale process of the Chicago Cubs.

Cubs fans have dreamed about a new owner for years, but since Sam Zell took over at Tribune Tower, the sale of the team has dragged.

The good news is that it looks like it will be business as usual this winter, according to Cuban.

''Nothing's going to change,'' Cuban said. ''They weren't asking everybody about whether they should opt in on Rich Harden. They're doing what they need to do."

Mark, if they ask you for some advice, tell 'em to give CC Sabathia a box of donuts and a blank check.

Tree choppin' on the comeback trail. Looking for a rebound isn't an act reserved for members of the SIU basketball team. The Saluki football squad is looking to rebound from a difficult 35-27 loss at North Dakota State University, in which the Bison were able to erase a 20-0 deficit with 35 consecutive points.

Luckily for SIU, lowly Indiana State comes to Carbondale winless this season (0-5) and winless on the road since 2004.

I'm not taking the Sycamores for granted, because I know as well as anyone that any team can beat another on any given day. But the annual cellar dwellers might be just what the doctor ordered - a confidence boost.