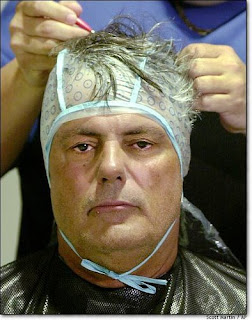 The rookie All-Star right fielder has struggled since the All-Star break and those struggles have continued into K-Fuk's first post season appearance.

And Piniella doesn't want to hear about it any more.

"From now on I don't want to hear about Fukudome anymore as far as whether he's going to play or not. I'm gonna play (Mike) Fontenot or Reed Johnson or somebody else and that's the end of that story. The kid's struggling and there's no sense sending him out there anymore."

Will there be a Little Babe Ruth sighting? Maybe some Reed Johnson action in right?

I guess that's why Piniella looks pissed in this pic.