Daily Dosage: It's Phinally Over! 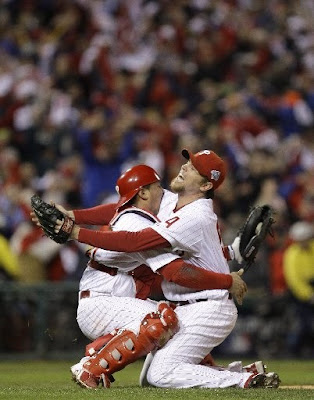 "He said yes!"
Isn't that adorable? The Philadelphia Phillies won the city's first major sports championship since 1983. And how did Brad Lidge celebrate? By proposing to catcher Carlos Ruiz! That's cute. Now Mitch Williams can move on with his life - after being the best man in the wedding of course. More to come on this story later. Now, time for the Daily Dosage!

We must protect this house. The SIU football team gets to play three straight in the friendly confines of McAndrew Stadium and it begins with a tilt against the University of North Dakota on Saturday.

Head coach Dale Lennon should know the Fighting Sioux very well. The former UND feature running back, assistant coach and head coach is in his first year as the Saluki head boss and has brought his philosphies from the great north here to SIU.

It should be an intense battle. Don't expect a blow out. Expect a close game as the Fighting Sioux should come out with a chip on their shoulder (cliche, I know, bite me!) as they'll be looking to impress the man that recruited them.

Not only will Lennon be treated by a visit from his former team, his family is coming too. In a nice little sidebar, the Lennon family will be taking the plane ride with the UND team. That's really nice of them.

I hope Coach Lennon, who told me yesterday that he has a little bit of house cleaning to do because he's "living like a bachelor" has the house nice and clean for their arrival. I know how Mom's can get if the house is even a little messy.

Chillin' poolside. Before Saturday's game even comes close to kicking off, I'll be poolside as the SIU swimming and diving team hosts the University of New Orleans at the SIU Rec Center pool. It will be the Salukis' first home meet of the season.

Salukis back in the pool [Daily Egyptian]