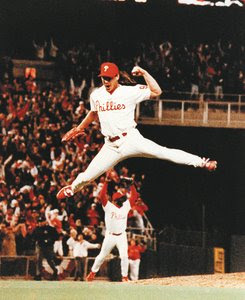 The Philadelphia Phillies are one win away from the World Series championship that the Chicago Cubs were supposed to win.

What? Did you not expect me to go there.

I have mixed emotions about this series ... and by mixed emotions I mean I don't care as much as an extreme baseball enthusiast should be, but I care enough to watch highlights on SportsCenter multiple times.

See, the Phillies have that whole tortured team/fan aspect that I can relate to. None of Philadelphia's four teams have won a professional sports title in 25 years.

That makes it an even 100 seasons since a championship banner has been waived in the City of Brotherly Love.

As for the Tampa Bay Rays, they've done two things no Cubs team has done since 1945.

And the Cubs spotted the Rays a head start of more than 100 years.

From afar, I must admit to having a slight admiration for the Rays because they built their champion the old fashioned way: through the farm system.

The Rays get a lot of credit (and deservedly so) for building a productive farm system that has brought Evan Longoria, David Price and B.J. Upton to stardom.

However, to get those players, the former Devil Rays had to compile some of the worst records in baseball to do so.

Eventually, you're going to land some quality players when you've got more top-10 picks than you know what to do with.

In the end, there is only one city that will be celebrating a championship by week's end. And since that city isn't Chicago (or Carbondale, or Chapel Hill...) I really don't care.