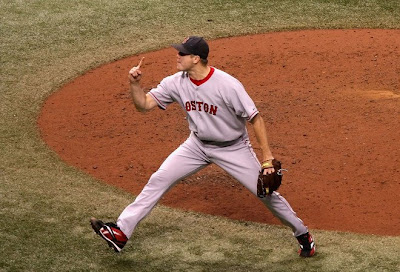 Stop me if you've heard this one before.

The Boston Red Sox are pushed to the brink of elimination and thanks to the contributions of David Ortiz, Jonathan Papelbon and Jason Varitek they're baseball season lives long enough to force a Game 7.

OK, I thought we've gone through this scenario once or twice.

If the Red Sox do indeed come all the way back to win this series, the Tampa Bay Rays will likely be written off as frauds by the media folk out there. They would go immediately from the darlings to the dumpster.

It'd be the biggest collapse since - dare I say? - the 2003 Chicago Cubs had a 3-1 lead and then choked away their best opportunity to go to the World Series since 1945.

Tonight's Game 7 matchup doesn't provide the sexy pitching names of this series like Beckett (who was darn good last night), Matsuzaka or Kazmir but baseball people like myself will enjoy tonight's pitching duel between Jon Lester and Matt Garza.

Lester and Garza are both wealthy with young talent and if both teams do their part, it won't be the last time we'll see these two square off in a big game.

So long from Austintown, Ohio. We've gotta go back to Carbondale.