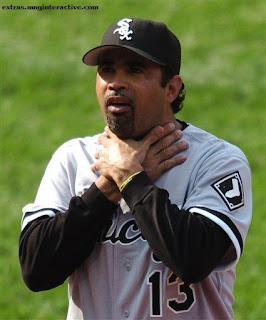 With the World Series phinally over (seriously, I'm done with substituting PHs for Fs) it's time to look forward to making our team's better. Since Hartwig, out White Sox expert has been given vacation time so he can finish his collegiate career on a high note, I'll be taking over this post.

I know what you're thinking - what do Cubs fans know about building a contender? And I'll give you that, it's a valid point. But I did build three fantasy championships and countless champions in the MLB 2K series.

So with this post, I'll throw away all biases I have towards the Cubs as I attempt to build a championship-caliber squad for the Chicago White Sox.

By my calculations (again, via Cot's Baseball Contracts) the White Sox have about $109 committed to their 2009 squad. I could be wrong however, I'm terrible at math. But that sounds like a safe number.

That should be good enough to help fill some of the holes on this squad, so let's get started.

Let's just make one thing clear, I don't think it's a possibility that Getz, Fields and Anderson all get starting jobs next season. Three youngsters starting with maximum potential and minimal experience and average numbers sounds like a recipe for disaster that the 2005 Cubs would be jealous of.

I think the Sox's top priority should be trading Javier "Not Big Game" Vazquez. Javy is a great regular season pitcher - even though his record hovers around .500 - and he racks up strikeouts like nobody's business.

But he can't beat the Twins or anyone in a pressure situation. He's got a no-trade clause that doesn't allow him to be traded to the AL West or NL West.

If the Sox can dump his $11.5 MM salary, they'd have about $23 million to spend this offeason. And that's good enough to make a few significant changes.

Expect Alexei Ramirez to move from second base to shortstop, opening up a spot potentially for a new second sacker. Brian Roberts is a potential trade option, while the best free agent out there is Orlando Hudson - a Gold Glover who can hit .300 if he can stay healthy.

Nick Swisher shouldn't be a center fielder, let alone one that plays everyday. Juan Pierre is going to be looking for a trade, and Pierre and manager Ozzie Guillen h ve ties to when both were with the Florida Marlins.

The White Sox's biggest hole might be at third base, where Josh Fields is capable, but might be better off used as trade bait. It's a dry free agent market for the hot corner, so Fields just might have to do if they can't acquire Chone Figgins from the Los Angeles Angels of Anaheim.

Coming Monday - a "dream" White Sox team and a team that I think would be realistically attainable.

Because "fair and balanced" is how I (try to) roll.