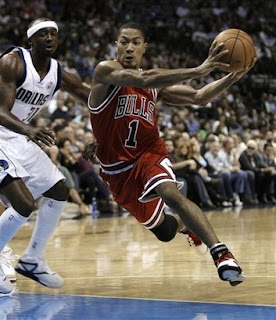 No need for a witty lead here.

If Derrick Rose is good, then the Chicago Bulls will have a good season. If Rose sucks, then the Bulls are screwed.

It's as simple as that.

With that said, Rose scored 30 points and dished 7 assists in the Bulls' 109-105 victory against the Dallas Fightin' John McCains.

Did I mention that this was a preseason game?

Nevertheless this point needs to be made: the fate of the Chicago Bulls' franchise rests on the shoulders of a hometown rookie who plays the most difficult position in basketball and is only months removed from his freshman year of college.

And really, that's a pointless statement to make seeing that the play of the No. 1 overall pick likely determines the fate of a franchise. Still, I feel the need to make that statement.

Deron Williams and Chris Paul have not only revolutionized the point guard position, but they've done it as youngsters. That makes Rose's task even harder.

For the next three-or-four years, he will constantly be compared to Williams who starred at the University of Illinois for three years and is turning into one of the elite point guards in the Association.

Or he'll be compared to Paul, who starred at Wake Forest for two years, and is some hybrid combination of prototype point guard and scoring machine.

And that's the difference between Williams/Paul and Rose. Collegiate experience.

Rose was a man among boys in his one season at Memphis, playing against the likes of as East Carolina, Rice and Southern Methodist.

Unfortunately for Rose and the Bulls none of those schools will be on their upcoming schedule.