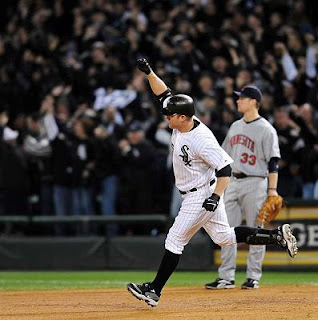 Sure, you're a little late and needed an extra game to beat the Johan Santana and Torii Hunter-less Minnesota Twins...but better late than never.

Speaking of better late than never, how about the performances of John Danks and Jim Thome.

Let's start with Danks, who Sox fans weren't fond of when he was acquired from the Texas Rangers in exchange for Brandon McCarthy.

All Danks did was pitch eight innings of shutout baseball, allowing only two hits in the biggest game of his career.

He deserved to be in the All-Star Game and pitched like a 20-game winner for most of the year. It's unfortunate the White Sox offense didn't give him the opportunity to reach that feat.

But he picked up his 12th win and lowered his ERA to an outstanding mark of 3.32...outstanding taking into consideration that he pitches in the American League.

Somewhere, deep in the heart of Texas is a man imagining the kind of rotation the Rangers would have with Danks and Edinson Volquez at the top of it.

How about Jim Thome, who most fans and "experts" wrote off early in the year as he struggled with at the plate. For much of the first half, Thome was a home run or nothing kind of guy who frustrated you with pop outs and his inability to move runners over.

I never gave up on Big Jim. Why? Because he continued to draw walks. I don't care what Dusty Baker says, it's the ultimate sign of a patient hitter. And when patient hitters wait on their pitch, it ends up in the seats.

Or in tonight's case, bouncing off the Dan Ryan Expressway.

Don't look now, but the White Sox have won three games in a row against three different opponents and head to Tampa Bay with some momentum.

I know the old baseball adage is "momentum is the next day's starting pitcher" but whatever.

The Sox have Javier Vazquez going for them.

In a big game? If history stands up, that spells trouble.

Um. That's why they play the games on paper, right?