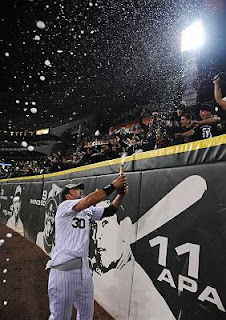 Last time I saw Nick Swisher, it was at a bar, with a pretty girl on his side. He was giving out free Bud Lights.

Never told him I was a Cubs fan. All I needed to tell him was that I was a fan of free beer.

When you're making $3.5 million in a year in which you hit .219, you should celebrate accordingly.

Also, when you're making $3.5 million, it doesn't matter what you're hitting. One magical motion bumps that average to 1.000.

I can't wait until Jonathan Papelbon or Prince Fielder get s ahold of him.

'Til then, have a GRAND day.