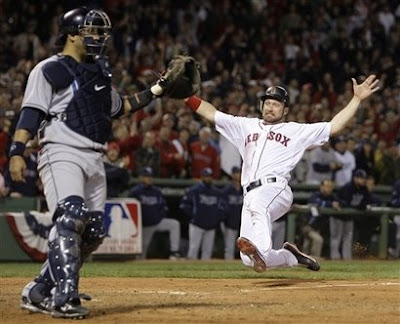 And I hate to say it but tonight's ALCS Game 5 looked like something straight out of a Disney movie.

The up-and-coming Tampa Bay Rays were looking to knock off the big bad Boston Red Sox from their championship form. And up 7-0 with the franchise's best pitcher it looks bleek for the home team.

Then the big bad Red Sox took a risk throwing their all-world closer in the seventh inning.

The move will go down in history as helping to spark the BoSox's 8-0 run to end the game, giving the team an extra life and helped send the series back to Tampa Bay.

If the Red Sox win this series, I'll be sick. But I won't be surprised.

Because I've seen this movie before and to be honest, I didn't wanna see another sequel.