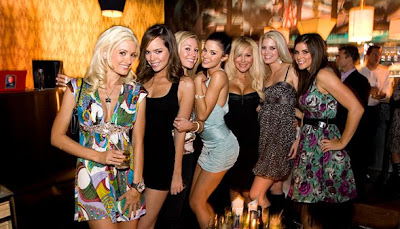 I'd like to start today's Dosage by wishing our own SalukiOrphan a very happy 19th birthday. Usually that's not a big deal, but in most college towns it gives you the right to go to the bars and serve as the DD for your elders...such as your editor or assistant editor.

So instead of dedicating a photo of the delicious Megan Fox that I knew the Orphan would absolutely love, I blessed him with the graces of several Playmates at the official Chickipedia launch party.

Which made me realize that The Big Dead Sidebar never had one of those. I guess we'll have to do that one day. Sounds like a Facebook party to me if I ever heard one.

OK, now that that's done and I'm still feeling sick as a dog as I await the DayQuill/Benadryl to kick in there is nothing more to do than give you today's Daily Dosage.


Bears bounce the Vikings. As my fantasy football team continues to plummet to levels that are beyond the depths of hell my focus slowly has turned to reality football (a.k.a the NFL) and specifically the Chicago Bears.

Thanks to constant updates from a few backseat passengers, I learned the Bears defeated the Minnesota Vikings on Sunday, 48-41.

48 points for the Bears is a lot, but Rick Telander notices that 41 is a lot to give up to a team that wears purple and its quarterback is Gus Frerrotte.

Kyle Orton continues to make me look foolish for not believing in him, throwing for 283 yards and two touchdowns. I still think my beard is better than his.

Hendry became the full-time GM in 2002 when Ed Lynch and his five-year plan never flourished.

Under Hendry's reign of terror the Cubs have won the last two NL Central Division titles and won another in 2003 when the team was five outs away from its first NL Pennant since 1945.

This news nugget deserves a full post, which will come later (maybe) in the afternoon.

Quality Linkage:
That's it, I'm all out of witty lines. Back to get some more DayQuill right after this!